What Happened in Building X 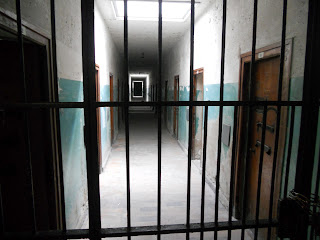 We toured the Dachau Concentration Camp which was the first concentration camp in the large system of concentration and extermination camps Hitler and the Nazis set up.  It had originally been a munitions storage facility.

We followed the steps of the former prisoners- walked through the gate, stopped where they turned in all of their possessions, including clothes, and got the hair all over their body crudely and cruelly shaved.

We saw where the prisoners “lived”. We stood where the prisoners stood in roll call twice daily.  We learned the type of work detail, and abuse the prisoners were subjected to, and the watery soup they were given to eat.  We saw the cramped barracks and imagined the cold, heat, and discomfort of so many hurt and hungry prisoners.

Dachau was not a extermination camp however, late in the Nazi regime Building X was built.  Building X was so named to disguise the horror that it housed - the systematic killing and burning of small groups and individuals.   We walked through the entire building, following the condemned prisoners  steps.  First into the room to remove clothes, then the room where the clothes were disinfected, then into the room prior to the crematorium. I imagined the prisoners in that room - cold, scared, angry.  As I looked into the next room The Gas Chamber, I will never forget my feeling of dread.  I stepped a little closer so I could peer into the sparkling white room.  As I did, I felt a great wall of energy from the ceiling to the floor and on either side of me, warning me not to go any further.  Frightened, I quickly backed away from the door leading to the chamber and escaped outside.  I was amazed at the experience, and the force of the invisible energy.

I have never felt anything like that energy force before.  I will always remember Dachau and it’s victims.

- Julie Blaugher, MWW Participant
Posted by Leslie at 2:48 AM